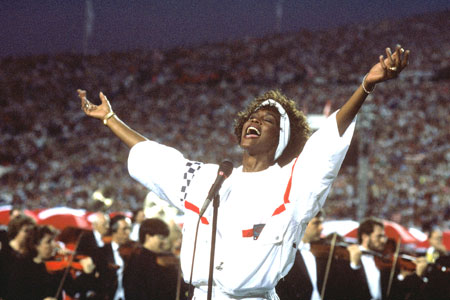 I can’t blame Whitney Houston for my love of the game. Yet, her rendition of the Star Spangled Banner to launch Super Bowl XXV has stayed with me for 20 years. It’s true that the song resonated greatly because we were in the midst of The Gulf War, and although it would actually end a month after the iconic game was played and The New York Giants beat The Buffalo Bills by a point, we football fans watching from home didn’t know that. And, as Whitney belted out those poetic words, it was almost impossible for anyone to hold back the tears.

I watched her performance again this morning and, I don’t know if it’s the pregnancy hormones or the memories, but I welled up again. I remember lying on the floor next to my parents bed, my brother and sister in the room as well, with my Dad watching from the bed. I was practically eating the rust colored carpet and enjoying every single minute of the action. My Dad was really into the game, shouting at the TV and cheering right along with us.

It was our own little intimate Super Bowl party. No fare, no fuss, just a small little family and an amazing football game. No other sport in our home was watched with as much enthusiasm as Football. I grew up with a love of professional sports, and it was not surprising that I ended up cutting my teeth in the PR world working with sports accounts. It was my dream to one day work with the NFL, and I was fortunate enough to have worked with The NFL Quarterback Club.

The Gridiron Greats of Madison Avenue event was an incredible moment in my career, and I still have photos of Boomer Esiason, Troy Aikman, and Bernie Kosar from the big day at the now defunct All-Star Cafe. Later, I got to work with some of the best NFL journalists in the Country. My favorites were the team at the Milwaukee Journal Sentinel, headed by Bob McGinn, who were always kind, courteous and professional when dealing with a pitch from me.

For former client The Professional Team Physicians (PTP), I would grab Monday mornings newspaper and read through the injury report, then call all the NFL journalists and pitch my roster of doctors to comment on player injuries. It was thrilling, exciting, and although I felt a bit like an ambulance chaser, when we got the PTP hit in the paper, I was on top of the World. Lord, but I absolutely love football season. I would get so depressed after the Super Bowl, knowing that I would have to wait 6-7 months before pre-season football began again.

So you can imagine how difficult it is for me to live in Israel, and not have those football moments to pass down to the next generation. While single, I used to fantasize about having my own little family, and how we would spend Super Bowl Sunday. I imagined a large den, giant flat screen TV, family and friends, tons of delicious football fare, all crowded together to watch the game. I could practically hear the giggles and screams of delight as the children raced back and forth to play in other rooms and then come back for reports about the game. I envisioned our friends, seated on the sofa, in laz-e-boy chairs, on the carpet, with beers in one hand and heaping plates of food in the other, all screaming at the refs and coaches when a play goes the other way. I pictured the mess in my kitchen as I shuttled back and forth playing both hostess and football fan, making sure that my guests were kept happy and satisfied while I kept up with the score.

In reality, I’m married to a man who prefers soccer to American football, my daughter has yet to watch even highlights of a game, and my week is absolutely ruined if I stay up for a game which has a 6:30 p.m. EST kick-off. I really wanted to watch last night’s Super Bowl but exhaustion set in, and with a full week of work ahead of me, there was just no way I could have justified losing the sleep. It was a difficult decision to make, but one I would have made over and over again.

Living in Israel can be a sacrifice. For me, sacrificing football has been unfortunate. And, while I personally will always have my football memories and my staunch love of the game, I’ll have to settle for passing down whatever I can to the next generation.