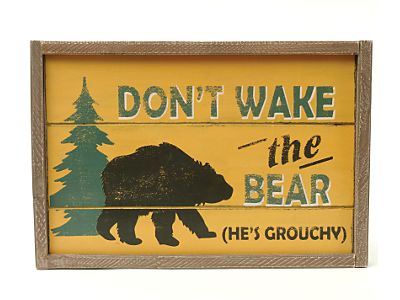 Baby J.’s nickname is “The Bear”, and for good reason. When she is in a mood, watch out! We joke in our home that we should walk on eggshells sometimes, so as not to “wake the bear”, but once her inner bear has been pulled out of hibernation, we literally run for cover.

I don’t know what it was this morning, but Baby J. woke up in a particularly foul mood. She’s been fighting a very bad cold now since Sunday, and since we all share everything in this family, both DH and I are fighting it as well. I had a lousy night’s sleep myself, and physically could not drag myself out of bed to pick her up when she cried at 6:30 a.m. When DH goes into her room to get her in the morning, it really just sets her off.

I managed to take over after about 5 minutes but it just wasn’t enough for her. She wanted me to hold her while she drank her milk. Then, the chair at her little table needed to be pushed in – at just the right angle – so she could eat her cereal. After that, she needed me to carry her to and from the room while she continued to drink her milk. It was exhausting. My patience wore thin after she upended her milk cup not once – but twice – on the living room rug. I took away the cup and reprimanded her, but it was like I did the worse thing in the world. She started melting down and then DH came to take over so I could go back to bed.

He didn’t have much luck either and, by the time she was ready to walk out the door to gan, she was in full on melt down mode. It didn’t help that we took a warm washcloth to her face to wash away all the crusted snot that accumulated overnight. And then, all I did was try to put on her sweatshirt since it was chilly outside this morning and she reacted as if we were beating her (g-d forbid!!).

When DH and Baby J. walked out the door, she refused to hug or kiss me. In fact, she refused to even look at me. I’ll admit, it really hurt, but I didn’t let it show. I felt like she was punishing me for deviating from our normal routine, and while I know a toddler is really not sophisticated enough to think that way, that’s exactly how I felt.

This is all new to us, and we honestly don’t know how to handle mornings like these. Should we be stricter disciplinarians? Should I have put her into time out after the second time she dumped her milk? She also threw her blocks all over the room in a fit of rage. We’re just not used to her having these types of meltdowns and are at a loss.

How do we handle the toddler that wakes up on the wrong side of the bed? Help!