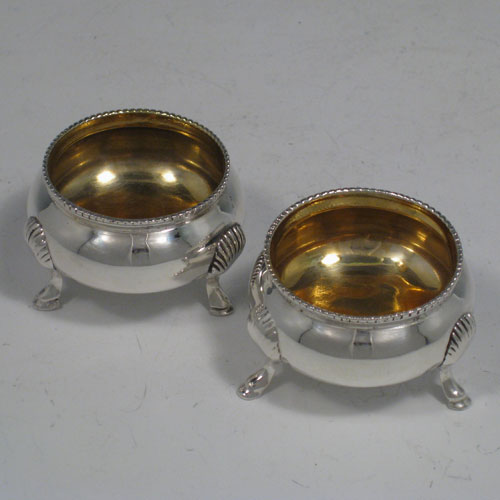 DH’s brother and sister-in-law bought us, as a wedding present, beautiful silver salt and pepper cellars from Hazorfim. They’re horribly tarnished, the glass insert for the salt pot is chipped and I’m pretty sure Baby J. threw out the little matching silver spoon that went with the salt pot. (I let her use it to eat her chicken soup on Friday night, because she begged and I didn’t have the heart to say no). But, we love this set and it’s part of our Shabbat table. I noticed a few weeks ago that Baby J. has been eyeing the pots and, every chance she gets, tries to grab them. Now, I’m all about toddler curiosity and I let her explore her world – within reason – but DH and I are pretty adamant against her spilling the entire contents on our Shabbat table.

And then, this Friday afternoon as we were rushing to get ready for Shabbat, I heard DH yell from the dining room. I was in the bedroom feeding Baby S. and he was just about to go into the shower when we realized that Baby J. was too quiet. That usually meant mischief and sure enough, she was up to her little eyeballs in mischief. DH yelled so loudly that I actually put Baby S. down and ran out to see what happened. And there, looking guilty with a little pout on her face, sat Baby J. in a pool of crushed black pepper. She had managed to get her little fingers into the black pepper pot and upended the contents on the table, the chair, and the dining room floor.

I smiled to myself and sent DH to the shower so I could take care of the clean up and the reprimand. As I pulled out the broom and dustpan, I realized that I could take a different approach to the reprimand. First, I told Baby J. that I knew she was curious about the salt and pepper pots. And then, I took a pinch of pepper from the table and told her to open her mouth. I explained that we put the salt and pepper on our food and so she could eat it. She gladly opened her mouth. I knew she hadn’t swallowed when she immediately said “Od” (Hebrew for more) and so I took another pinch and put it into her mouth.

I heard the crunch sound as her tiny teeth chewed the pepper and then, the wailing began. She stuck out her tongue as tears ran down her face and I held out my hand for her to spit into. Her cries intensified and so I went to the kitchen, took out the lemonaide and filled her sippy cup. She followed me into the kitchen, hysterica, and I handed her the cup and told her to drink. She downed the cup within seconds, handed it back to me and then slunk away into the living room. She gave me a bit of a backwards glance and then sat down on her couch.

I’m pretty sure she learned her lesson, although I hadn’t meant it to be punishment when I asked her to eat the pepper. I realized it might be a bit hot for her, but I wanted to help her explore her world – in a safe way.

But let’s be honest, I know she won’t be upending those salt and pepper cellars anytime soon.

Do you think it was mean of me to have her eat the black pepper? How would you have disciplined her in this situation?