Day two post first treatment and well, I guess I’m not the Super Woman I thought I was.

On Tuesday, I strode into Shaare Tzedek’s hematology department all fight. You know? Like, let’s just get this started already so I can kick this cancer and move on with the rest of my life. They took my blood pressure and weight and then I moved on to get the hemlock put into my arm. Fortunately, I had been drinking non-stop all morning so he had no problem finding a vein. On Monday, I’m going in to get a PICC line which will be in place permanently until after my treatment is completed.

We then met with Dr. Ashkenazi where he explained exactly what I was about to get coursing through my veins. It’s a drug combo called R-CHOP. The R stands for Rituximab and it’s not a Chemo drug but rather it’s a targeted biological therapy. Dr. Ashkenazi explained it in brilliant laymen’s terms. The Rituximab acts like a heat seeking missile, systematically searching out the cancer cells and hopefully killing it. So, that’s the one punch. The two punch is the CHOP which is chemotherapy drugs. That’s like following up by dropping a nuclear bomb that kills all the cancer but everything else as well.

I was like, hook a sister up! Let’s do this! So, we grabbed a bed in the room since first treatments can last an entire day. They take a long time with the Rituximab because you could develop an allergic reaction. They loaded me up with a sedative and some anti-allergy drugs like Benadryl and started giving me low-doses of the Rituximab. This was me hooked up with the first  bags: 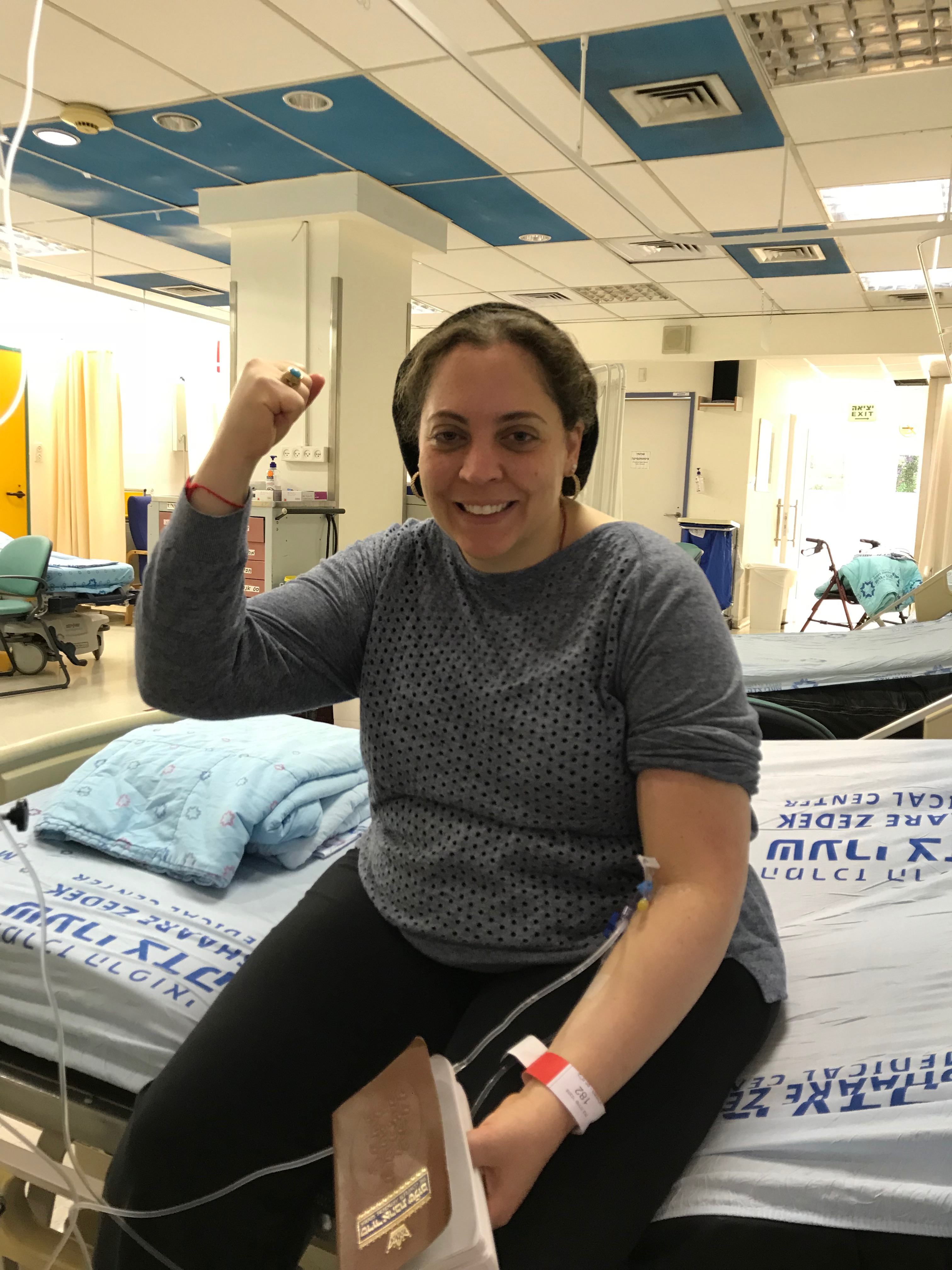 I’ve got my siddur and my Grandmother’s ring and I was ready to get treatment going. About an hour in, I started feeling really sleepy. It was good I had the bed. Nechama, the nurse we had that day was amazing. She was really thorough and kind and took her time explaining everything she was doing. The social worker also came to meet with us to explain a lot about my new status, our rights, and what we can claim from Bituach Leumi (National Insurance) that should help us during the course of my treatment. I was struggling to keep my eyes open while she was talking to us and then I just fell asleep. I was out for about 2 hours. When I woke up, we were almost finished with the Rituximab. Originally, Dr. Ashkenazi thought I would need to come back on Wednesday to get the Chemo drugs but since I was tolerating the Rituximab, I told them not to wait.

The nurse came back and said we were now finished with the first course (in Hebrew, using the terminology for food). So I laughed and asked her what was for dessert. Well, that got a chuckle out of her, but then she returned with 4 bags of the chemo drugs. The H of the CHOP is bright red and I believe it is also sometimes called the Red Devil. I’m not sure where I read that but I read it somewhere. Before she started the CHEMO drugs, I asked Gaby to get me something to eat. I thought it would be a good idea to put something into my stomach so I wouldn’t feel queasy. He returned with some barley soup and majadera. In hindsight, not the smartest move on my part, but what the heck did I know?

We were there from 8:00 – 3:30 p.m. They were all shocked I managed to get a complete treatment into me in the first day. We then met with Dr. Ashkenazi who prescribed prednisone meds and some Zofran (anti-nausea drug) and sent us home. I have to come back next week for a PICC line and then to meet with him again to check my red and white blood cell counts. If these counts go too low they will have to give me a shot to get them up to help fight possible infection.

I hoisted my heavy knapsack on my back and insisted on walking to the car. I felt good! They had given me anti-nausea meds before starting the chemo and I just wanted to move and get out of the hospital. I put on a mask before leaving the ward and we picked up the girls on our way home. They were really scared of the mask but we explained it to them and I showed them some of the pictures we took during treatment so they could see what I had been doing all morning. I think they felt better once they saw the pictures.

When we got home, I insisted on going on the treadmill for a 20 minute walk. Again, I wanted to just move my body and I was feeling good! I wiped the treadmill down with alcohol wipes and went for a 20 minute walk. I had set up the Chanukiah’s for lighting the night before and we lit candles when I was finished. I decided it would be nice if I made myself a healthy dinner: some fresh cod, quinoa and steamed broccoli.

And then the first wave of nausea hit me, hard. I abandoned all dinner plans and went to lie down. Dr. Ashkenazi told me to take the Zofran at night but didn’t give me a specific time and it was only 5:00 so I didn’t know if I should take it. We went back and forth contemplating and then finally it got so bad that I took the Zofran.

Gaby left the house with the kids to go to his family’s Chanukah party and I just spent 3 1/2 hours puking my guts out. It was horrible. I had terrible stomach cramps and diarrhea, it was like that horrible scene from Bridemaids. During the Chanukah party, where there was a Minyan of 10 men, they added a new first name to my name.

At first, I was hesitant about adding a name since my perception was that this is something you do as a last resort. But my parents Rabbi at YIKGH (Rabbi Yoel Schonfeld) told my Dad that you add a new name upon diagnosis. I consulted with my Rabbi (Rabbi Zave Rudman) and he agreed with Rabbi Schonfeld, and then I did a little research.

Rav Yitzchak said: Four things tear up the decree against a person, and these are them: Tzedaka (charity); crying out (in prayer); changing one’s name; changing one’s deeds, and some say even changing one’s residence” (Talmud, Rosh Hashanah 16b). As a precedent, the Talmud points out that our Matriarch Sarah was destined to be childless until G-d changed her name (in Genesis 17).

From here, the Rema teaches that it is proper to change the name of a very sick person, to tear up the decree against them (Shulchan Aruch, Yoreh Deah 335:10).

OK, so that convinced me and we started thinking about new names. You’re supposed to take on name that mean life, healing, or blessings. But none of the eligible names resonated with me. And then we started talking about timing – my first treatment coinciding with the start of Chanukah. The significance of light and how where there is light, there is life.

I started crying when we talked about the name so we decided that was the one.

Rav Rudman sent us the tehillim and “ceremony” that needed to be done to add the name and while it’s preferable for the sick person to be in the room while this was happening, I was too busy being all Exorcist into a bucket.

Now we pray that my new name will change my Mazal and help me beat this terrible disease!!

Gaby arrived home at 9:00 and I was just a mess, it frightened the kids but Gaby explained to them that we were expecting this and it will (please g-d) pass! At this point, I was really in a state and Gaby tried to figure out how to help. We called around to some of the doctors on call and they agreed that I must have thrown up the Zofran so I took another pill. I literally kept my mouth closed for 40 minutes to make sure the Zofran “took” and then another bought of violent vomiting started. I was so spent and scared, now I was worried about dehydration. We called my mother in law to come take me back to the hospital, it was already 11:30 and I had been vomiting for close to five hours. And then, just like that, I felt a wave of relief. We called my mother in law back and told her not to come, I was feeling like it had passed and I was ready to try to sleep. Lying down was out because I just felt too queasy and so I slept fitfully sitting up.

I sat up at 5:30 am with a start. You remember that feeling as a kid when you lost a tooth and put it under your pillow for the Tooth Fairy? You couldn’t wait to put your hand underneath the pillow to find whatever was left in the tooth’s place. Well, that was my feeling except I was convinced I was going to turn around and see my ponytail just lying there. It was frightening and so I was relieved that my hair was still attached to my head. At 6:00 I took another Zofran and then slowly got out of bed to get morning going. I was able to make Aruchat Esser, help the kids get dressed, pack school bags and rummage through our clean sock bag to find a pair for each kid. My stomach was still hurting me a bit but it wasn’t too bad so I pushed through. When the family left, I curled up in my chair and just got to work. I was able to make some eggs and steamed spinach and some lemon ginger tea. I was happy to be able to keep that down. I started on the regimen of Prednisone pills and felt queasy but okay.

The day progressed and the nausea was just gnawing at me. It reminded me of my first trimester for all four pregnancies. I had terrible nausea for the first 14 weeks but you just suck it up and deal with it because BABIES!! That’s what you get at the end, you get to have your babies. So, even though I’m still feeling gross and queasy today, I’m looking at this like my pregnancies. I’m doing this for my BABIES only they’re 4, 6 1/2 and 9 and I’m going to get through all of the nasty side effects and the rigors of treatment so I get to continue to raise and be here for my babies (and of course the love of my life, Gaby).

I was feeling a little down this morning so I’ve been blasting some music to keep my spirits up. I’ve been listening to a lot of Imagine Dragons lately, upbeat music really helps.

Thank you all for your messages, your encouragement and your tefilot. It’s what’s keeping me going.

Chag Urim Sameach! May this Chanukah bring us tremendous light and life.