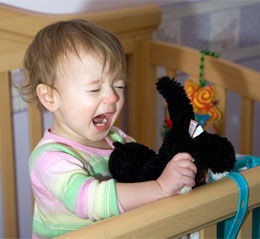 That’s what I whispered to the Lord as I was covered in her crap during a diaper-change-wrestling-match-moment that would rival the WWF. We don’t even know when this all started, but recently, Baby J has taken a dislike to having her diaper changed. It might have happened around the time she entered her 18th month, but it definitely took us completely by surprised.

Even mention of the word “nappy” or “diaper” – I change it up hoping one of the words isn’t as threatening – sends her into a tailspin. And, even the patience of a Monk, would be challenged by her adamant refusal to be changed.

We had no idea what to do! I immediately hit my Facebook page to ask for Mommy advice, and some I hoped would be helpful.

I put her in front of the TV, made sure she had perfect view of everything on the screen, that the volume was just right and that she liked what she was watching. Attempt #1 was a failure. She refused to lie down, which makes changing a poopy diaper very difficult. After counting to 10, singing, handing her the wipes, asking her for some help, asking her for permission, etc. nothing worked. Once again, I had to pin her down and basically hold her in place until she finally grew slack and just gave in.

It’s a horrible feeling! We feel like we are terrible parents. I absolutely hate physically restraining her but we cannot let her sit in a doody diaper! The last time she wasn’t changed enough – her day care worked was “too busy” – she developed horrible diaper rash. The kind that required me to keep her home and change her diaper every single time it was wet, while applying a heafty coat of tushie cream to heal her already extremely sensitive skin.

Advice #2 – Sing her cute songs, make funny faces, give her a cute toy to hold

OK, I thought this one would work. I sang her a silly song and made funny faces while carrying her to the changing table. I had already put a new toy next to the Skip Hop diaper caddy and thought all was going pretty well. Until she spied the wipes and then FREAKED out. Wrestle match #2 ensued and I actually lost. It wasn’t a very dirty diaper, so I ended up chasing her naked little tushy around the apartment until I was able to strap the diaper on – with her standing up! I need to figure out how to master that one as I think it will be the only way to change her wet diapers.

Yesterday was a jam packed, busy day for Baby J. She went to day care in the morning, came home, watched her hour of TV and then I filled up the kiddie pool on the balcony and we went for a “swim”. She lasted about 30 minutes before she begged me to take her inside and put her down for a quick nap. She slept for 20 minutes and when I came in to get her, I smelled the reason why she woke up so quickly. I first asked for permission, and Baby J gave me her little “ya” of approval. Then, I enlisted her help! I sang a silly song, handed her 2 diapers to hold and she laid down no problem on the changing table. I got really excited, thinking that this was actually going to work. I ripped open the tabs and pulled down the diaper. And, suddenly, her little fingers went STRAIGHT to the poo! I quickly grabbed a wipe and grabbed her hand to wipe off the poo before she – shudder – tried to stick it into her mouth. And, as soon as I grabbed her hand, she started wriggling on the changing table. And, before I know what happened, she had managed to press her doody tushy up against my tshirt and then shmear her feces down my arm. I don’t think I’ve been so grossed out in a while. I whipped my t-shirt off and threw it onto the floor and, I guess the sight of my bra relaxed her, because she finally stopped squirming. Unfortunately, the room and I were covered in poo. I quickly changed her, put her down and then headed her into the living room so I could clean up.

When DH came home, he took one look at my face and saw that something was up. Completed fed up, I filled him in on the great Poopygate moment, and while he stifled a laugh he chided Baby J for what happened. I wondered, do you put a child into time out for not behaving during diaper changes? Would she even understand that?

We’re at a completely loss and we’ve resorted to praying that Baby J makes all her poops while at daycare, since she apparently doesn’t give her daycare worker any problems.

Has your child melted down during diaper changes? Is it just the age? What did – or would – you do?